FreeNAS is awesome. Also, FreeNAS is hard… I recently switched from a Synology device, and while I am already appreciating the increase in functionality and power, it’s certainly not as easy to do some basic tasks. One of those tasks is setting up a Time Machine share where all of my household Macs can back up. Between reading the tutorials and giving some trial and error myself, I think I have come up with a good solution.
And before I get started with the step by step guide, let me reiterate one thing: Permissions, Permissions, Permissions! If you ever find yourself banging your head against a wall because something in FreeNAS isn’t working as you expect it to, the likely culprit is permissions. Once you wrap your brain around them, though, things become more simple. Hopefully this guide helps put a foundation around that. 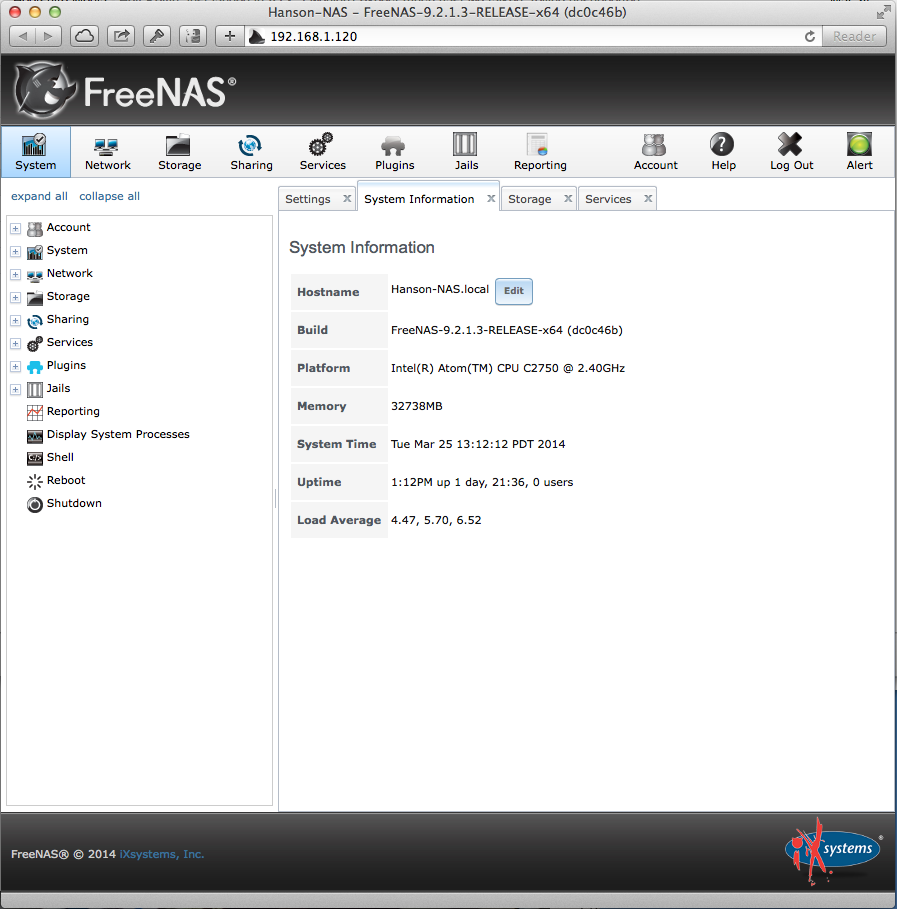 END_OF_DOCUMENT_TOKEN_TO_BE_REPLACED

I had been thinking about getting a network attached storage system for years. Even before the Snowden controversy, I didn’t love the idea of my files being stored in a cloud like Dropbox. I also wanted to have some kind of home theater strategy with my ripped media. I pondered the options for a long time, and my final decision came down to buying a Synology device or building my own device with FreeNAS.
I chose Synology for a multitude of reasons

I’ve had my DS1513+ since it was first released, and while it has definitely done its job, there are some things that bother me about it. First of all, bugs…

There have been some major security bugs with Synology. For example, how about that time when everyone found bitcoin miners running on their boxes? Their CloudStation solution is great for sync’ing files, but there are still loads of bugs with it, especially on OS X. I have reported these bugs repeatedly, and they still don’t get fixed. For example, iWork files are treated as folders, rather than files, and the internal package contents get updated separately, causing iWork to constantly ask you to re-save the document during use. Cloud Station creates conflict files all the time, it often freezes Finder, etc. They either ignore bugs or introduce new ones with every release, it seems. It’s great that Synology has so many mobile applications, but these are buggy as well. They are supposed to keep me logged in, but I continue to have to re-login on my own. Their UIs aren’t great, and the functionality isn’t killer.

Speaking of security, all remote NAS access with Synology is being migrated to quickconnect, their solution of giving you a unique ID that lets you acccess your NAS wherever you are, without setting up port forwarding on your router. This is theoretically a great solution, but the service goes down from time to time. And furthermore, I got a NAS so I could get away from being dependent on a hosted vendor for my data. Even though all my data is on-prem with a Synology NAS, I still depend on their external service to access it via quickconnect. With the development process for DSM being closed source and them not fixing bugs I submit, I don’t really feel like I can trust their device with my data. Synology still doesn’t support volume-level encryption either. And if you do encrypt a shared folder, some features like NFS are disabled.

In terms of applications I run on my DiskStation, I really only use CloudStation for file syncing across all my devices. I tried to run Plex, but it requires transcoding to be super useful, and the CPU on the DiskStation isn’t up to the task. Thus, I built my own dedicated Plex box. I also use my DiskStation as a TIme Machine destination for all the Macs in the house, but that can be done with any NAS.

So… Why FreeNAS? FreeNAS is open source, and I can build my own box. While being open source doesn’t guarantee security, the open transparency and development process certainly makes me feel better about security. Because I can build my own box, I’ll build one that is silent and uses less power than the combination of my Plex box + Synology NAS. It’ll have more RAM and be faster. It will be fast enough to do the Plex transcoding. Furthermore, rather than depending on a black box Synology Hybrid Raid solution, I’ll be on the tried and true ZFS, which I have far more trust in. For sync’ing my files, I’ll use bittorrent sync, which is a P2P sync’ing solution. I won’t need to depend on Synology’s Quickconnect service.

Thus, it’s decided! I’m excited to have a new geek project! I’ll be buying all the parts for my new FreeNAS box, and then I’ll sell my DS1513+ and my M93P Tiny machine soon after. Watch this space… I’ll be documenting my build!